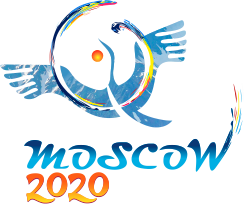 INTERNATIONAL
BALINT SYMPOSIUM
AT THE BAIKAL
Is held in the framework of The IX World Congress for psychotherapy 2020
June 30 th – July 6 th 2020
Registration
Information about all the events of The IX World Congress
THE TRAINING BALINT MARATHON will unfold within the framework of the IX World Congress
International Balint Conference in Moscow
(Precongress – June 24-25th, 2020)
The demonstration of the Balint method, including the presentations, discussions and master-classes (Congress, June 27th, 2020)
The International Balint Symposium at the Lake Baikal "Implementation of Balint work in the medical and psychotherapeutic practice"
(Postcongress June 30th – July 6th, 2020)
More details 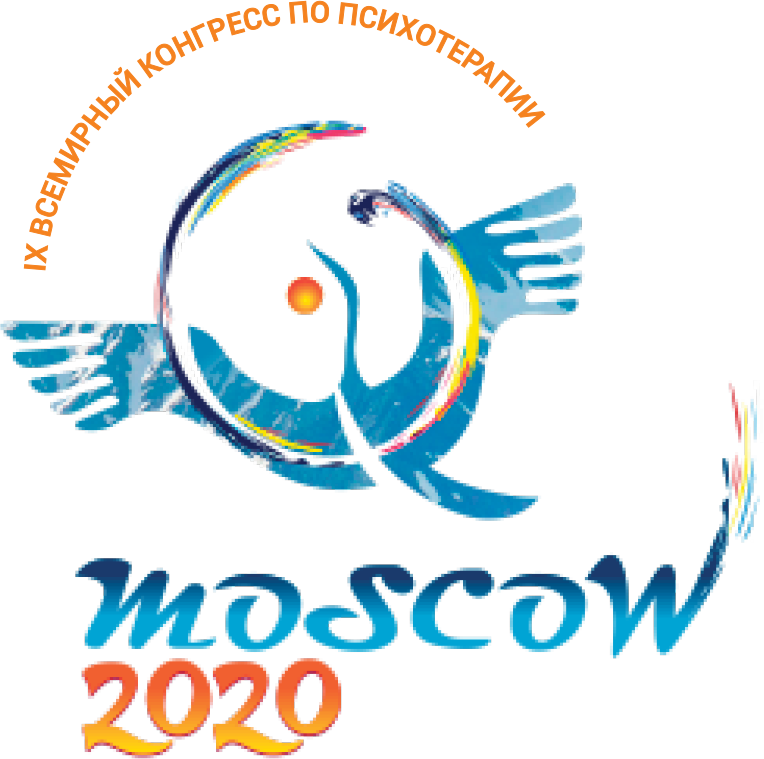 INTERNATIONAL BALINT
SYMPOSIUM AT THE BAIKAL
"Implementation of Balint work in the medical and psychotherapeutic practice"
June 30th – July 6th 2020
is held at the shore of the Lake Baikal, in the Baikal National Park
PhD in Biological Sciences, Assoc.Prof. of the Moscow Institute of Psychoanalysis,
Head of the Committee of the Balint movement of the All-Russian Professional Psychotherapeutic League, President of the Russian Balint Society

(Russia, Moscow)
Nikolay KLEPIKOV
Co-Chairmen of the Symposium
MD, Doctor of Medical Sciences, Professor, founder and Past-President of the
Polish Balint Society, member of the International Balint Federation, Medical Director of the Warsaw Institute for Psychosomatics 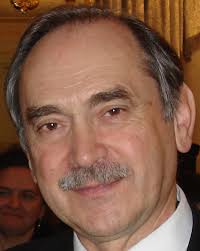 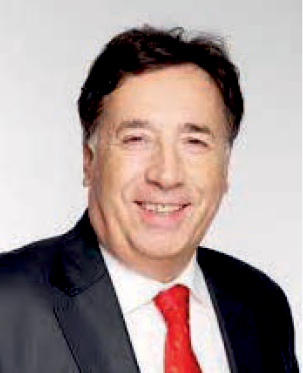 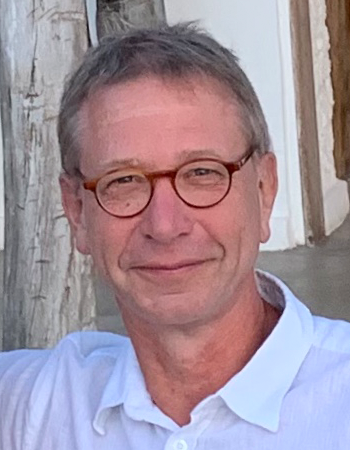 Organisational committee
SCIENTIFIC PROGRAMME OF THE SYMPOSIUM
Reports:
"The potential of Balint Group. Speciﬁc and nonspeciﬁc factors that
improve the eﬃciency of professional activity of helping professionals"

"The Balint group and evolution of medical practice"

Tuesday, June 30 th
16:00 - Arrival to the Recreational Compound «Fregat» - the venue of the International Balint Symposium.

17:00 - THE OPENING CEREMONY of the Events of The IX World Congress for Psychotheraphy at Lake Baikal. Greeting.

10:15-10:45 - Plenary session. Report "The potential of Balint Group. Specific and nonspecific factors that improve the efficiency of professional activity of helping professionals"

Every day
08:00 - Gymnastics and morning meditation at the shore of the Baikal

Those delegates who would like to take part in The International Balint Conference on June 24 th
–25 th in Moscow and participate in the IX World Congress for Psychotherapy on June 26 th -29 th join
our group in Irkutsk in the morning on June 30 th 2020.

Please make a request at the page CONTACT
and we will meet you at the Irkutsk Airport in the morning on June 30 th 2020
The path of Balint to the power place of the Baikal
UNIQUE VENUE OF THE SYMPOSIUM
ABOUT THE LAKE
Lake Baikal is one of the most beautiful and picturesque places on the planet. It is the most ancient lake on our planet, aged between 25 and 35 millions of years!

Baikal is the world's largest reservoir of fresh water, containing 22% of all fresh and clean water of our planet. Also, Baikal is the deepest lake in the world. The lake was declared a UNESCO World Heritage Site in 1996. 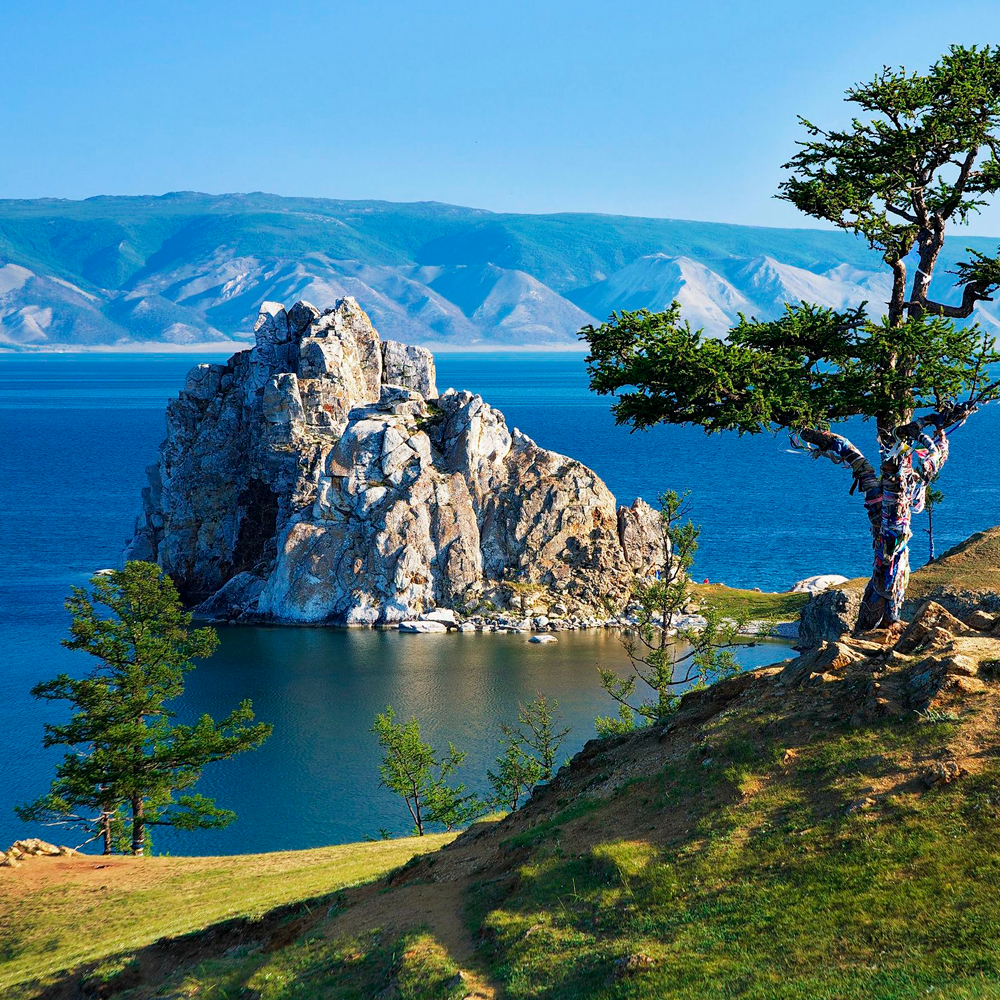 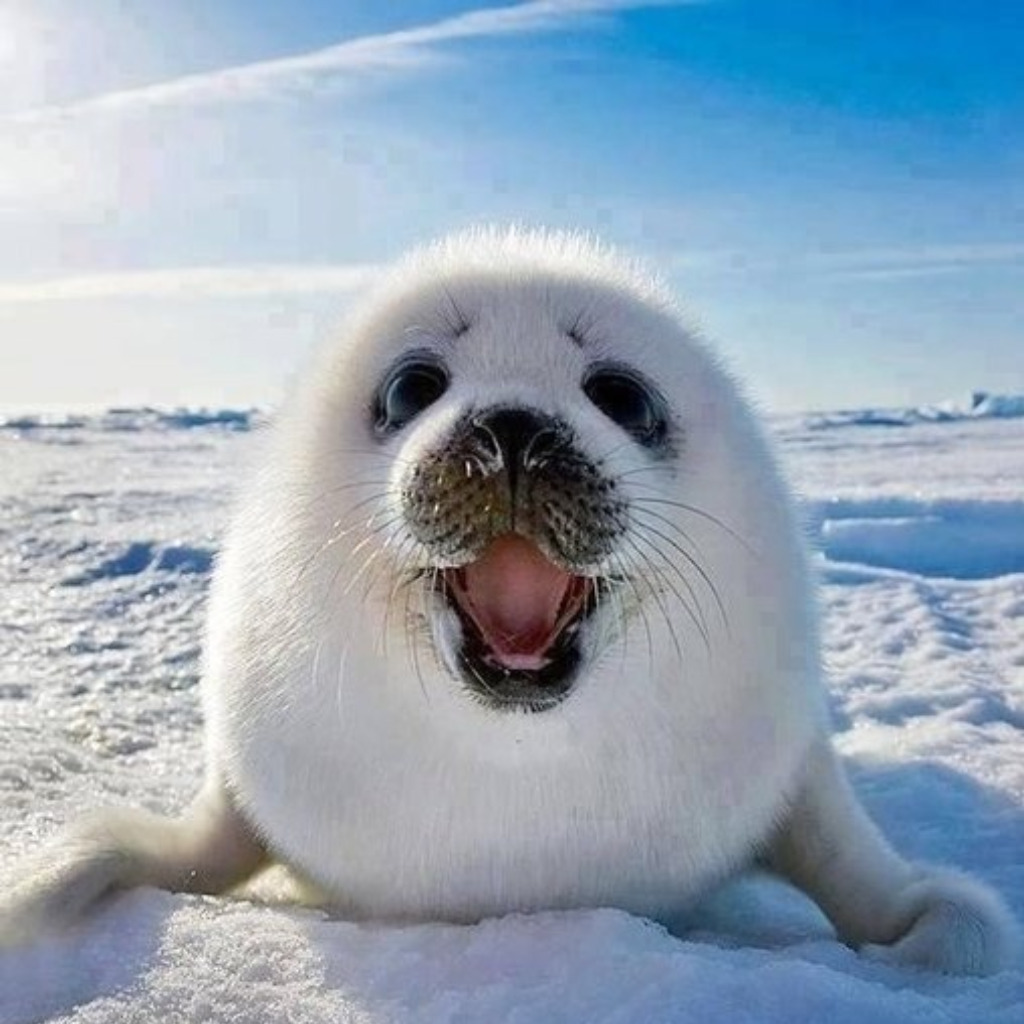 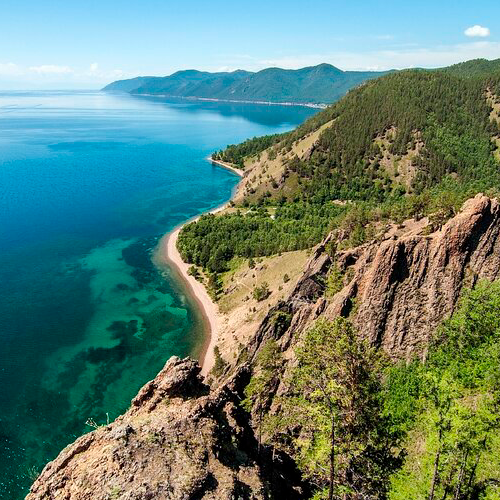 TERRITORY
OF ETHNIC BURYATIA
The International Balint Symposium is being held in the East Siberia at the ancient Lake Baikal at the territory of ethnic Buryatia. The Buryats are the largest indigenous community of the Baikal Region. The traditional faith and form of world cognition of the Buryats is the shamanism, which views a person as part of Space. Shamanism is a complex scene; it is often mistakenly equaled to magic and sorcery. Shaman is an intermediary between the world of people and the world of spirits. He is able to fall into trance, connect with the spirits and be present in both worlds simultaneously.

The culture of Buryats is also closely linked to the Buddhist tradition, transferred to Buryatia from Tibet and Mongolia. This tradition is based on Buddhology, including the philosophy, Tibet medicine, astrology and the Buddhist art. Buryatia is the center of Buddhism in Russia. The Ivolginsky temple preserves the imperishable body of lama Dashi-Dogdzo Itigelova – the one in the world scientifically registered fact of the imperishable body. 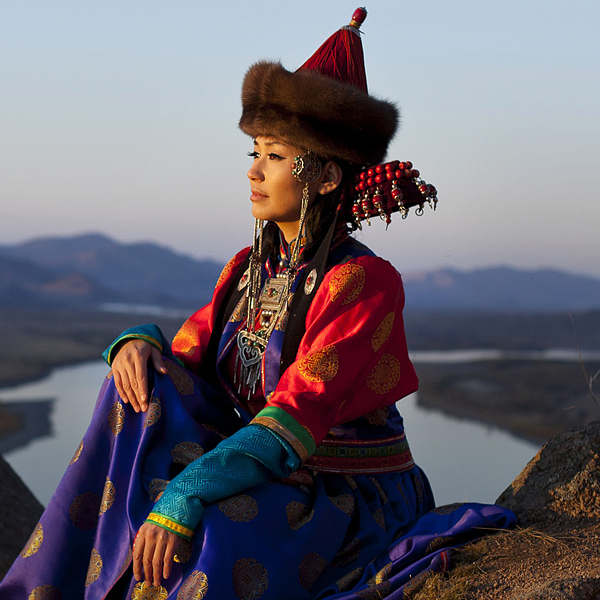 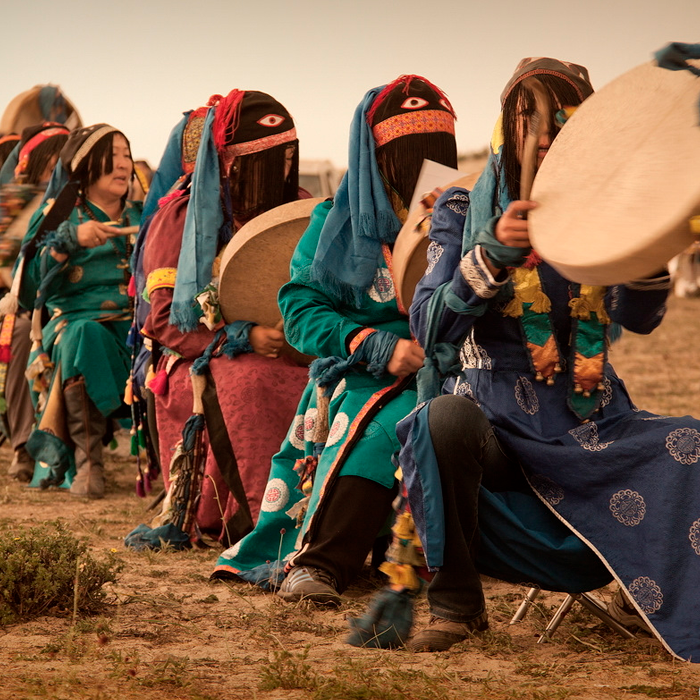 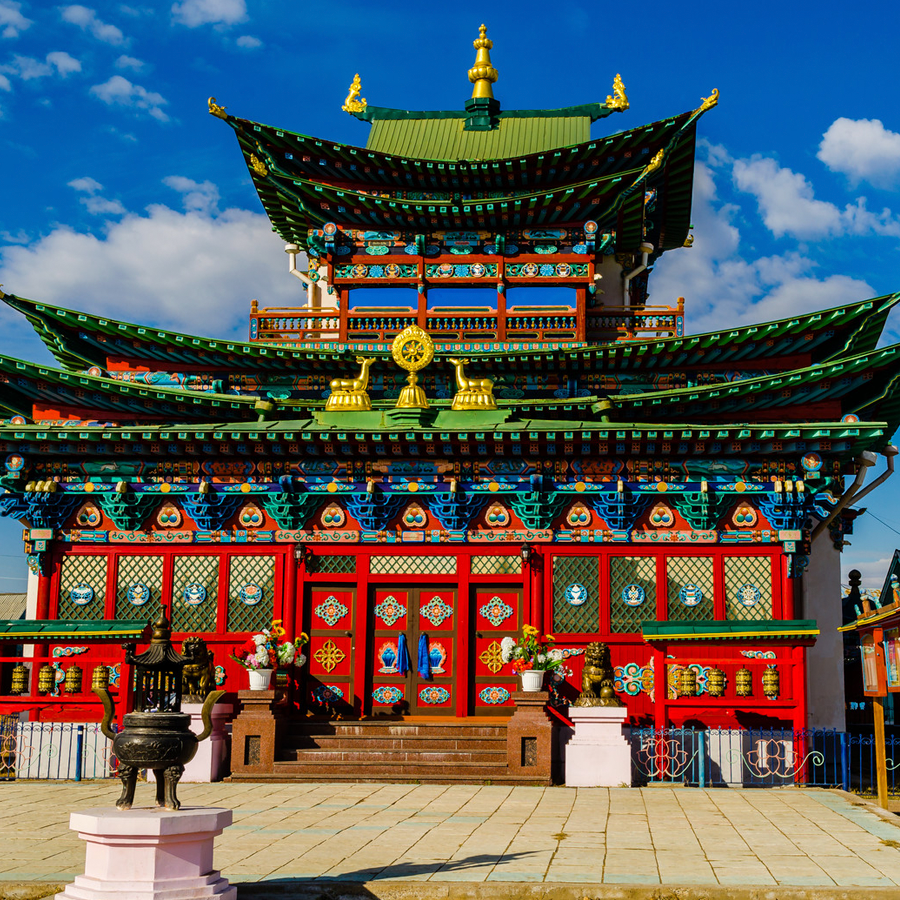 Nicknamed the Pearl of Siberia, located in south-central Siberia and surrounded by mountains,forests and wild rivers, Baikal is an immense and breathtaking area of natural beauty.

In total, 336 rivers flow into Lake Baikal, and only one streams out of it — the Angara river.
The Lake Baikal is unique: it is a genuine treasure given to us by nature.

Surely, its major preciousness is the purest and healthy water. The lake water is slightly mineralized and its transparency in spring reaches almost 40 meters! It is second to none in the world!

SIGHTSEEING PROGRAMME OF THE SYMPOSIUM
"THE WAY OF BALINT – TO THE POWER PLACE OF THE BAIKAL"
JUNE 28 TH – JULY 6 TH 2020
Irkutsk is "the gates of Baikal". Being born at the shores of Angara, it united the trade ways from Europe to China, Mongolia, Yakutia and Kamchatka. The privileged geographical location made it the strategic center of the huge territory from Enisey to the Pacific Ocean and Alaska. The modern Irkutsk is one of the largest economical, scientific and cultural centers of Russia.

Irkutsk is also the spiritual capital of the Siberia, where the traditions of the West and the East closely intertwine.

In 2019 Irkutsk was included in the preliminary list of the UNESCO cultural heritage.
Excursion in Irkutsk – the capital of Eastern Siberia 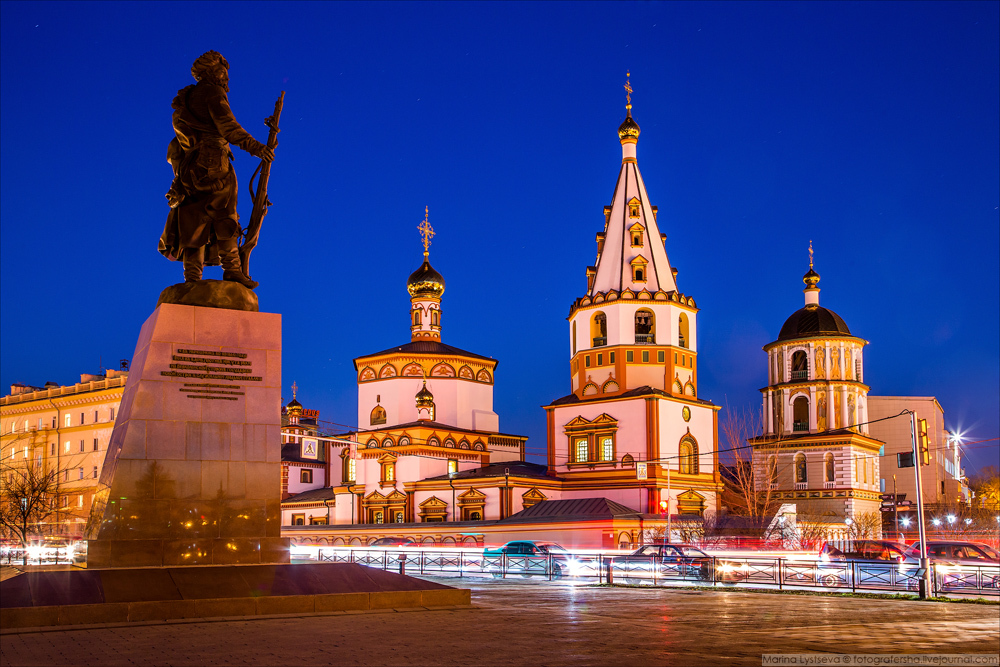 "Taltsy" is a unique collection of the historical, architectural and
ethnographic monuments of the XVII-XX centuries.

Here you will see over 9,000 artifacts and over 100 monuments of the wooden architecture, will get to know the material and the spiritual culture of the people of Baikal Region: the Buryats, the Evenkis, the Tophs and the
Russians.
Excursion to the Architectural-Ethnographic museum "Taltsy" 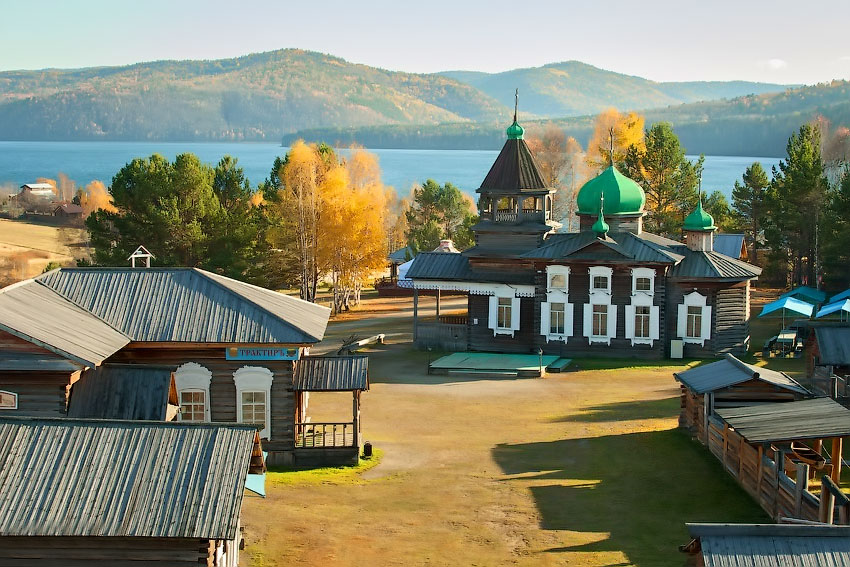 Listvyanka is the architectural landmark of the Baikal. Namely from here one starts
getting to know the amazing natural world of the Baikal Region.
Sightseeing tour at Listvyanka 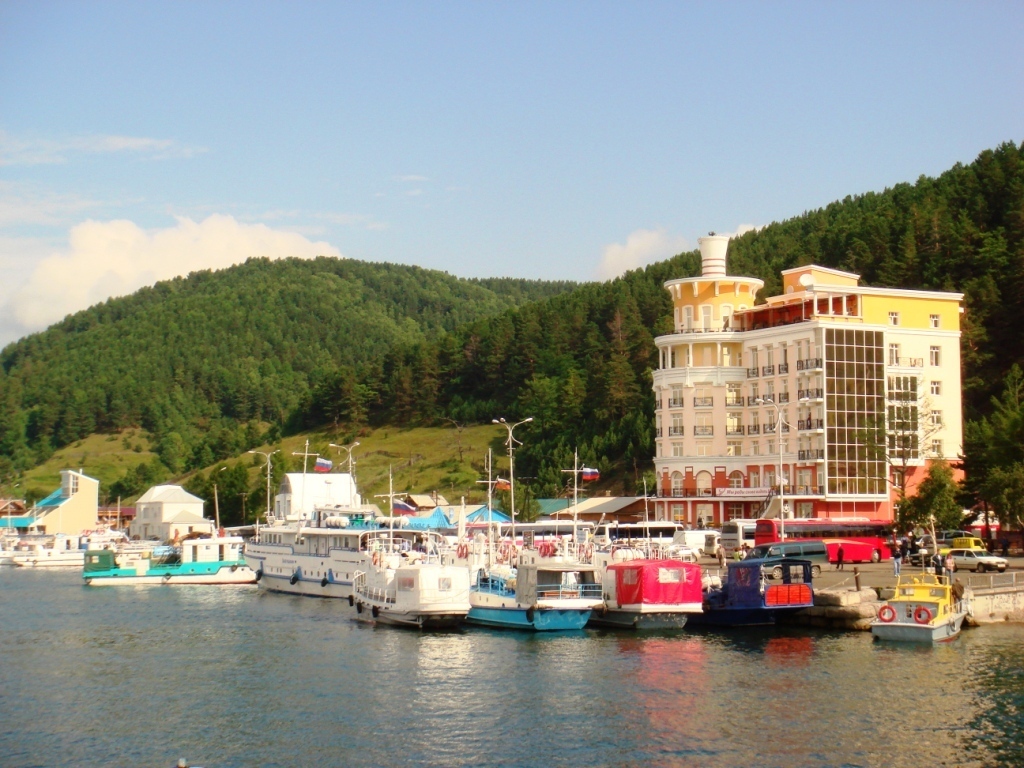 Getting to know the culture and traditions of the Buryat people. The colorful national
ceremonies and rituals allow full penetration into the people's culture. Meeting the shaman and participation in the ancient ceremony for the fortunate way.

Getting to know the national cuisine of the Buryats. Lunch at the Khan yurta – the most beautiful carved yurta of Russia. The concert of the Buryat folklore ensemble
Excursion to the Ethnopark "The Golden Horde" 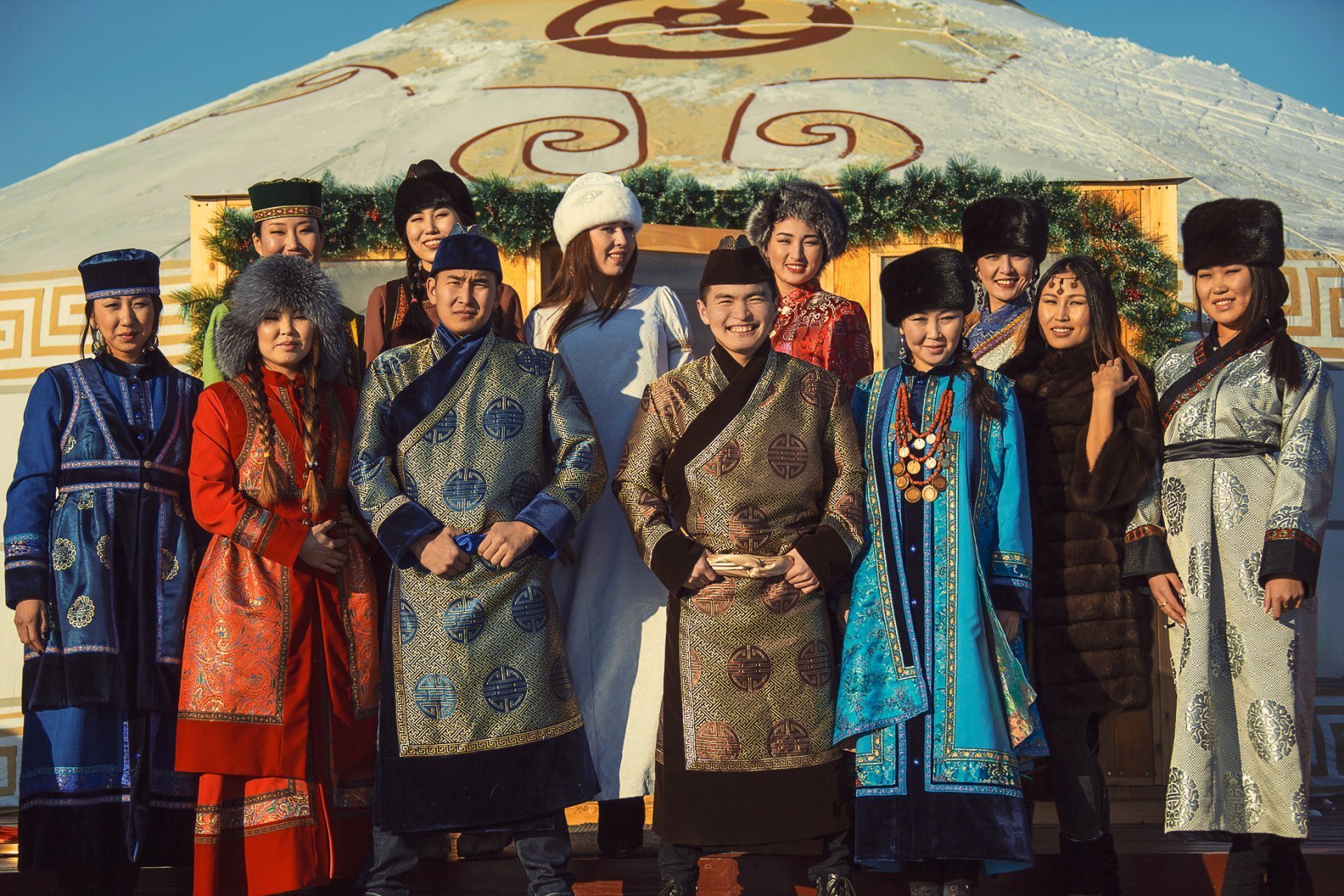 Using poetic images one might say that the Lake Baikal is the blue heart of the Siberia,, while the Olkhon Island is the heart of Baikal. Olkon is the largest and the most beautiful island on the lake. Only this island presents the full beauty of Baikal nature in one place.

Olkhon is considered the Place of Power – the hub of energy flows, which make a powerful influence on the physical and psychological state of a person.

In our travel we will enjoy the mesmerizing nature of Baikal, breathe its healing air, feel all the power, force and energy of this place!
Sightseeing tour to the Olkhon Island – the Pearl of Lake Baikal 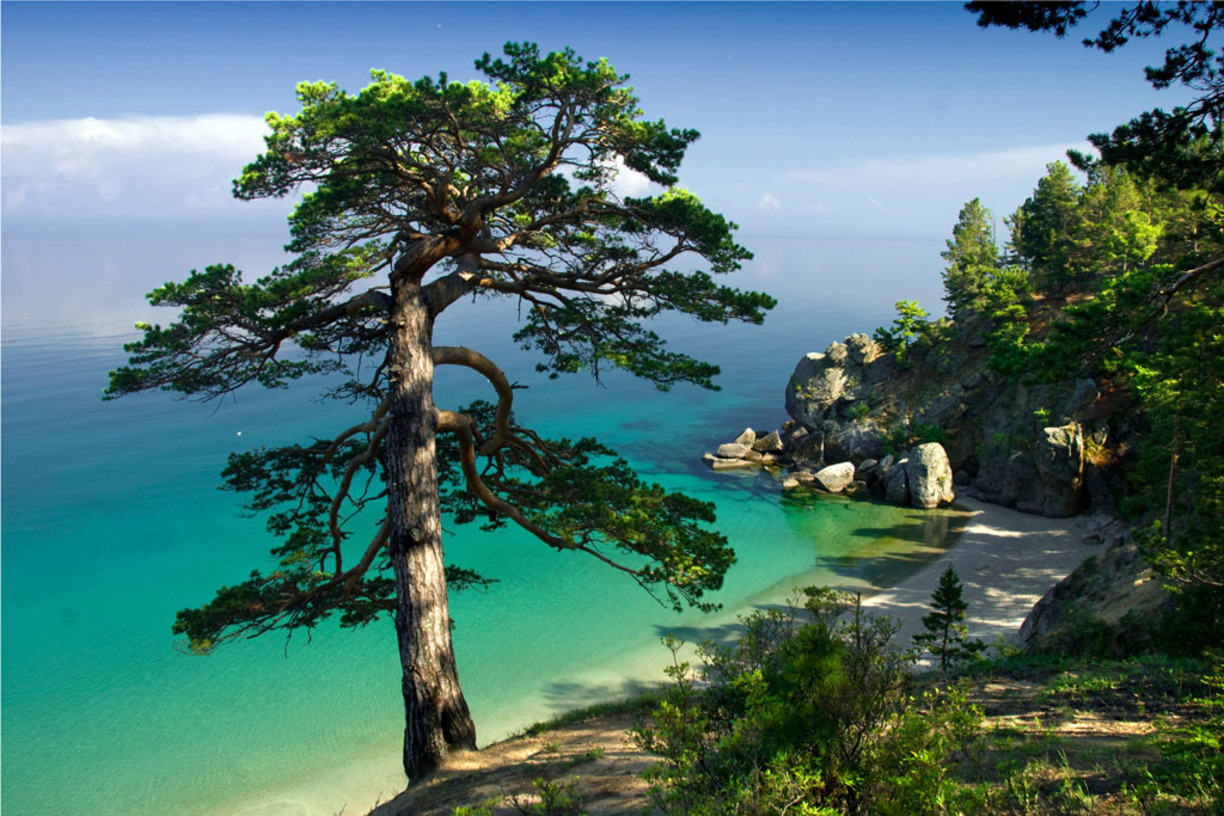 The Cape Khoboi is one of the most beautiful places at Baikal. Namely this is the most picturesque view of the Lake Baikal (the width of the lake at this
location is 80 km).

Cape Khoboi is one of the places of power at Olkhon. For its beauty and uniqueness
Khoboi has been deeply honored by the ancient inhabitants of the island. They considered it a sacral place and held their cult ceremonies there.

Legend has it that the first Buryat shaman has gained there his power. At our times, the representatives of various religious and esoteric streams hold their spiritual practices at Cape Khoboi. It is very good to meditate there, especially at sunrise.
Tour to the Cape Khoboi by speed boats 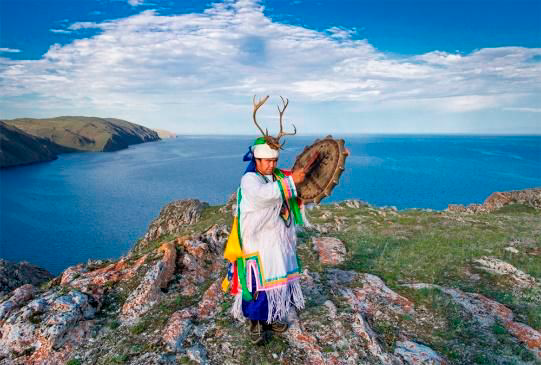 The other name of this place is "Shamanka" cliff. Nowadays Burkhan is the main
sightseeing point of the island, its architectural landmark. Its image is in every film or photo album of the Baikal. .

There is a legend that at the through cave at the cliff there is the entrance to the parallel dimension, which opens every year at the end of March.
Excursion to one of the nine great Asian relics – the Cape Burkhan 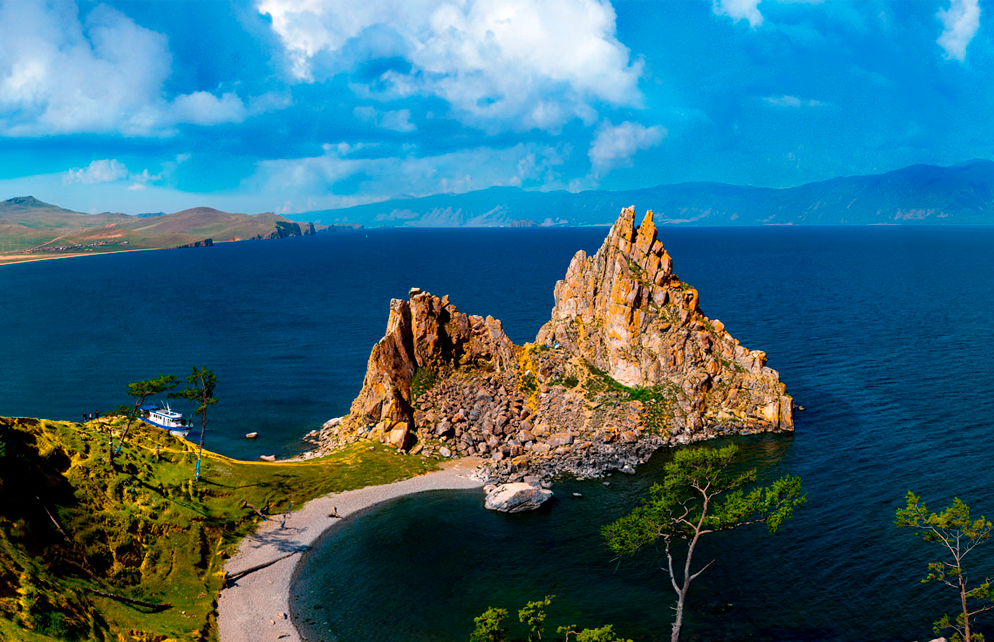 The Small Sea or Narin-Dalai – "the narrow sea" in Buryat language – is part of the Lake Baikal, separated from the large cup of the lake by Olkhon Island. The Small Sea is a gullet with a length of 76 km and a width of 4 to 17 km

The Western shore of Olkhon is known for its particularly beautiful grottos.
Sea cruise at The Small Sea 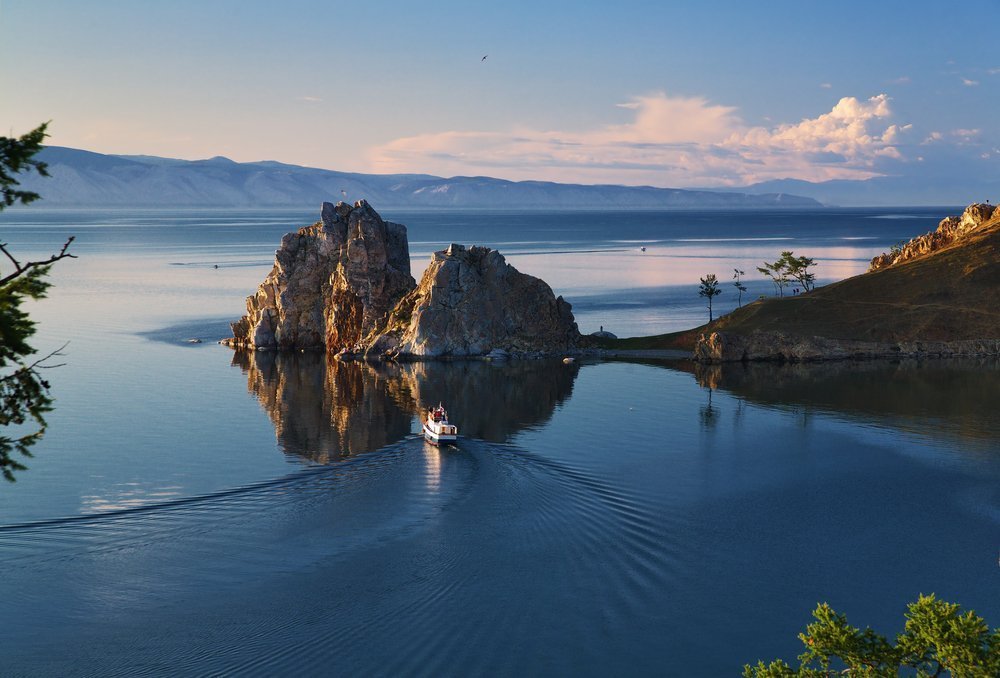 From the air, the Ogoi island resembles the silhouette of a dancing woman; at the place of her heart is a Stupa Troma Nagmo in the name of goddess of enlightenment and the shattering of all illusions.

Inside the Stupa the holy relics are placed: unique texts in Sanskrit, earth and water from all the continents and the seas and many other sacred objects. The wishes of those who go round the Stupa come true.
Excursion to the sacred Ogoi island 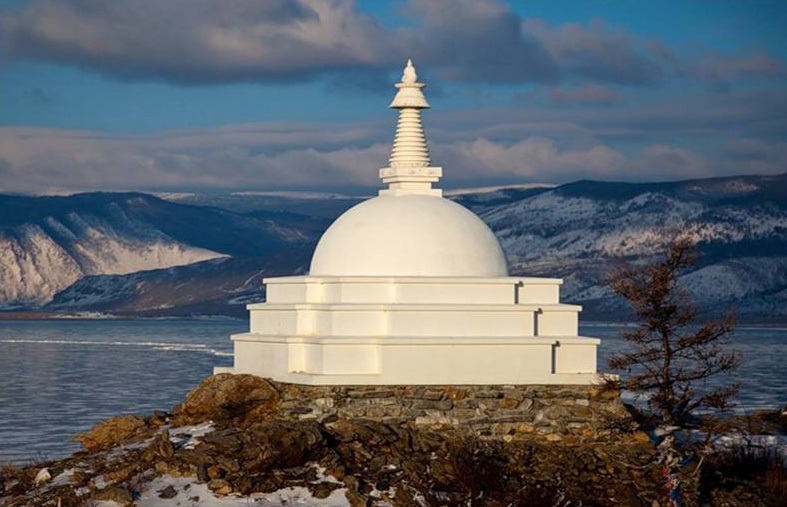 ADDITIONAL SIGHTSEEING PROGRAMME
at the Baikal region and Buryatia
If so desired, the participants of the International Balint Symposium may take part in this programme and see the Baikal region up close
July 6-10th, 2020
MORE INFORMATION
Tunkinsky national park is probably the most unique and intriguing place in the
Baikal region, strongly associated with multiple legendry of the Buryat folk.

Many centuries ago the infamous Khagan of the Mongol Empire, Genghis Khan,
marched with his vast hordes of troops there along the Irkut river bank.
Tunkinsky national park 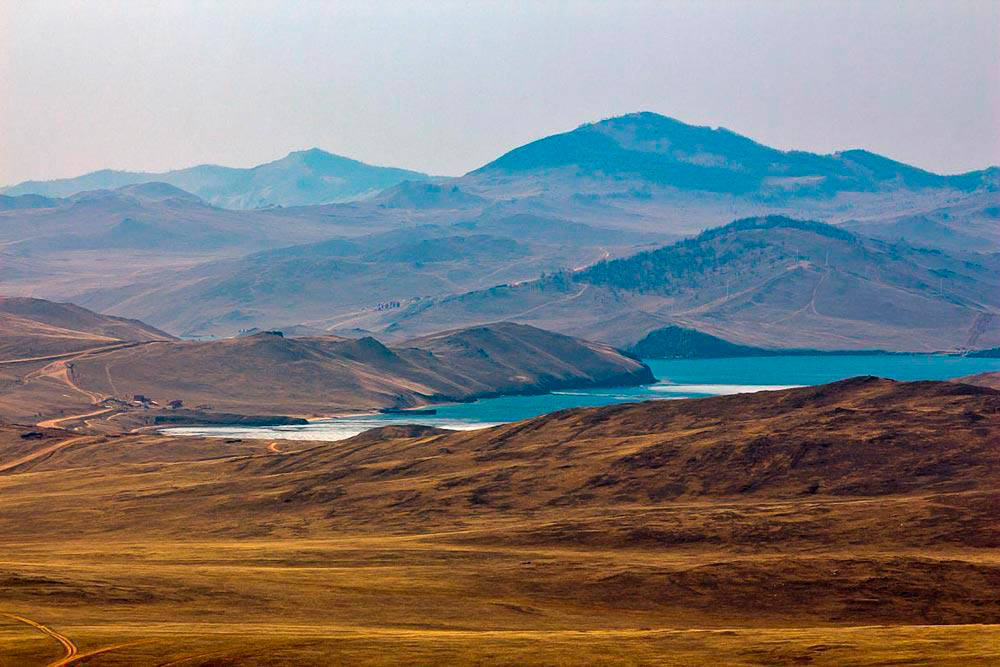 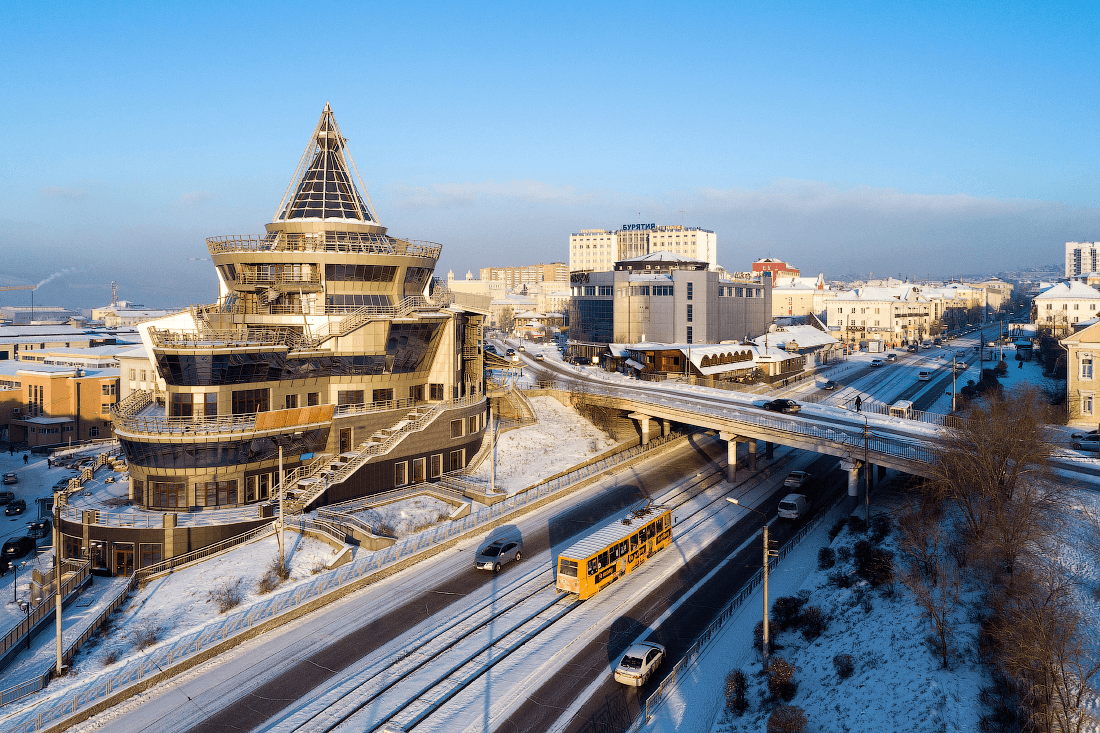 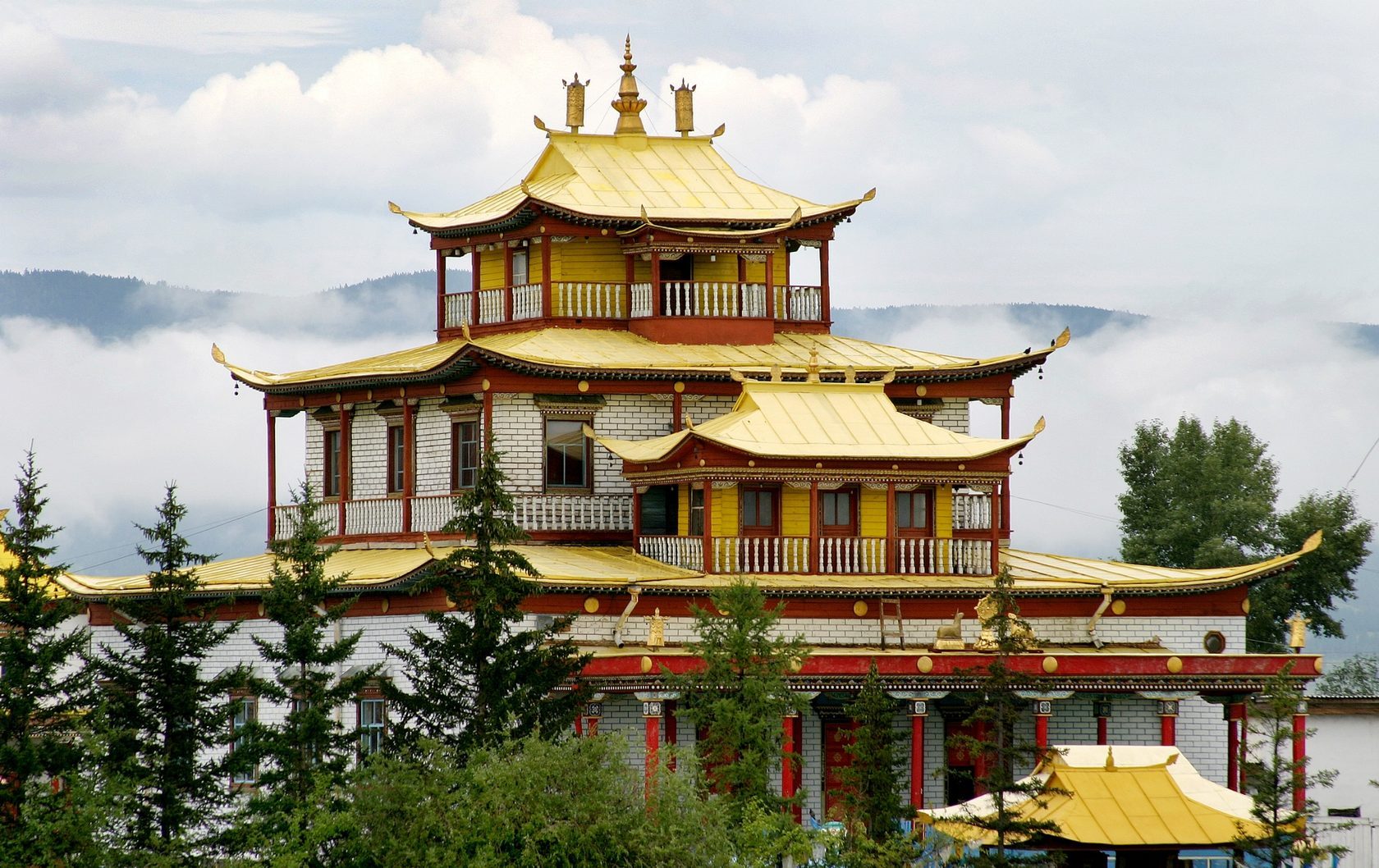 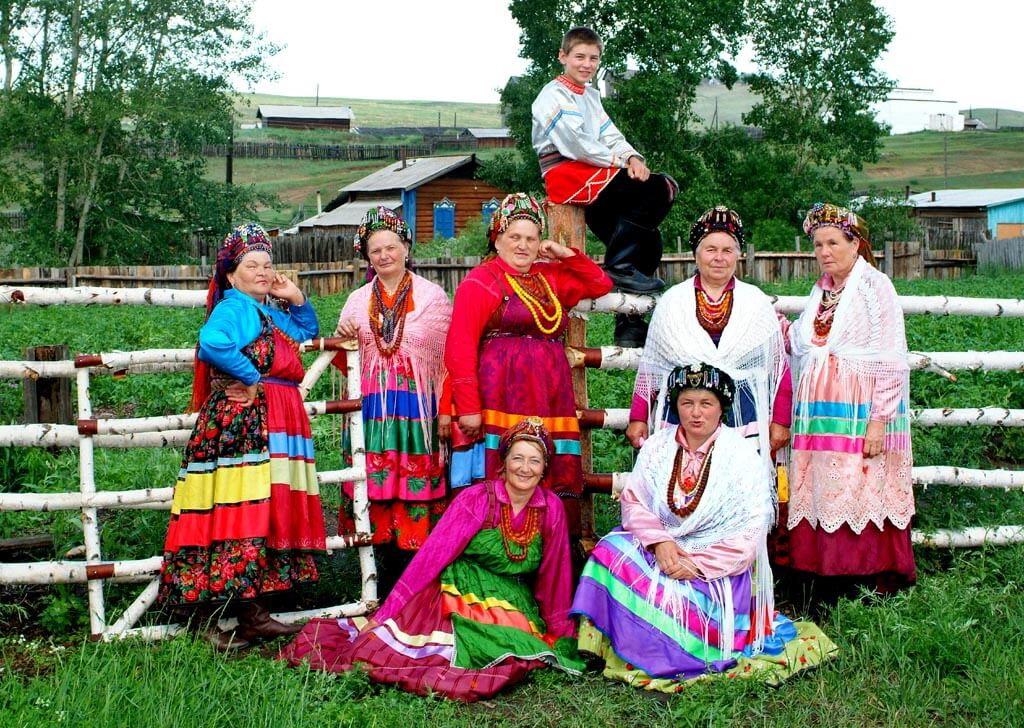 Trip to the old village where we'll get acquainted with the unique culture and traditions of the Old Believers (Siberian Orthodox) of Transbaikalia
Transbaikalia
IMPORTANT INFORMATION :

On the individual inquiry, it is possible to travel by train to the capital of Buryatia - the city of
Ulan-Ude, to visit the Ivolginsky Datsan (monastery) – the centre of Buddhism in Russia and
see the imperishable body of the Lama Dashi-Dojo Itigelova – the one in the world
scientifically registered case of the imperishable body.

Please make a request at the page CONTACTS


Leave us your message and we will respond shortly.
CONTACT
Get in touch With Us!
ivey1555@gmail.com 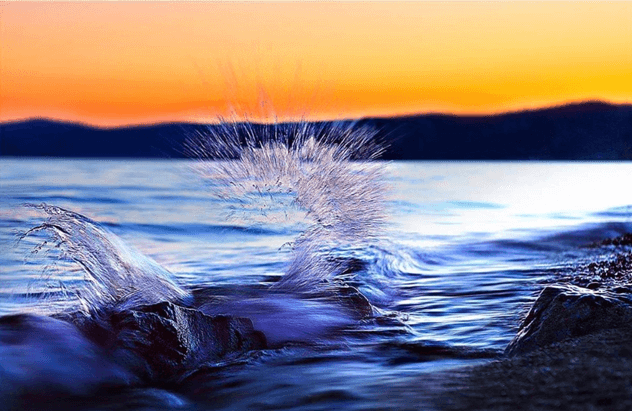